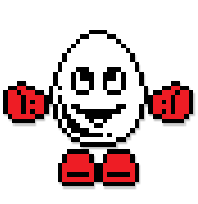 Hey man, never heard of Dizzy? Dizzy was a popular videogame series for PC in Europe back in the late '80s. The gameplay is pretty unique: it's a platforming game with point-and-click elements. There are a lot of enemies that can damage you, but you can't harm them. There are items to pick up and use to solve puzzles all over a big world to explore. Developed by the Oliver Twins for Codemaster (the same who brought you the Game Genie), it was so acclaimed it generated 8 games (plus a 9 one which was just a short 3.1 version) and a few spin-offs (which were pretty different from the classic gameplay).

All those games were released for Commodore 64, Amiga and DOS (except the first one) and a few for the NES too. The third game in the series, Fantasy World Dizzy, got some popularity recently after a Zero Punctuation review when Yahtzee called it the best game ever. That's obviously arguable, but all 8 games in the series (they're not all made by the Oliver Twins, but they approved the ones they didn't develop) are really good and pretty difficult. It's not just for the hard jumping and puzzles, but you can't also take with you more than X items (the number changed over the time) and you really have just a few lives. Today the franchise is pretty much dead (though the Oliver Twins are still alive, they said they're interested about working on the series again and they approved fan-made games), but those games are still today very enjoyable. Awesome gameplay, great difficult and good music. This is not the only franchise that deserve more attention but fuck it, let's have a page for motherfucking Dizzy.

You can play all the games in the series (except the first one) with Amiga or DOS, which have better graphic and sound than the Commodore 64 versions. In case you use Windows Vista/7, you have to use DOSBOX to play the DOS version. If you want to play the Amiga version use WINUAE, an awesome Amiga emulator. In both case, you'll have to google a bit.

There are three compilations of Dizzy games that came out in '92,'93 and '94. Nothing new, just main titles and spin-off together. Too bad there isn't a complete collection.

Wibble World Giddy is a Dizzy spoof. A good one, actually, so it's worth to check it out. There are also two sequels.

Retrieved from "https://vsrecommendedgames.fandom.com/wiki/Dizzy_Games?oldid=53966"
Community content is available under CC-BY-SA unless otherwise noted.