dai.e. games that were localized or released in the western hemisphere

the many models of GB & GBA 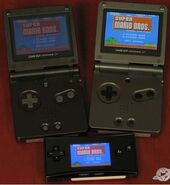 comparison of screen brightness
Add a photo to this gallery

Retrieved from "https://vsrecommendedgames.fandom.com/wiki/Game_Boy_Advance?oldid=67224"
Community content is available under CC-BY-SA unless otherwise noted.