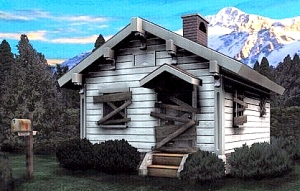 When people think back to video games in the 80's, usually arcade games like Pac-Man or Galaga come to mind - simple hand-eye coordination skill tests which relied on high scores for replay value. Games with a linear progression through a series of levels weren't prevalent until later in the decade. Few of these sorts of games attempted to tell a story.

Today, video games are sometimes compared to movies. Many modern console / PC games have cutscenes, voice acting, motion capture acting, and some static dialogue. Segments of some games are referred to as 'scenes' or 'chapters' rather than levels. Over the course of the game, the player character meets several other characters who face some sort of conflict to resolve or obstacle to overcome, and they are developed as the game progresses. (Sometimes the player character is developed as well; occasionally the player is left to control most of the silent protagonist's actions.) Although the medium has certainly come a long way, video games still tend to rely on atmosphere, presentation and interactivity to entertain the audience; the story is merely there to loosely connect each encounter together, and usually that's all we ask of it.

However, there are some games that are centered around a well-written plot. They exist solely to tell a story. Most of them are written by professional authors, who make use of their interactive nature to convey ideas and emotions in ways that are difficult or impossible to pull off in books or movies. Even in the 80's, companies such as Telarium and Infocom were publishing these games to market; afterward, individual authors such as Graham Nelson, Stephen Granade, Andrew Plotkin and Adam Cadre continued to release games as freeware via the internet.

Much like a console ROM requires an emulator or the actual console, most IF games require an interpreter. Currently, the most popular interpreter is Gargoyle, which works in Windows, Linux and Mac OS X. Most of these games can also be played directly from your browser, without needing Java, Flash or any other plug-in.

All of the following games are played with simple text commands. The game won't understand every verb or noun, and may have trouble with complicated grammar, but usually it's not difficult to tell the game what you want to do. Each location in the game is called a 'room', and you move between them using compass directions like 'south' or 'northeast'. The image below shows some common commands to try in almost any game. 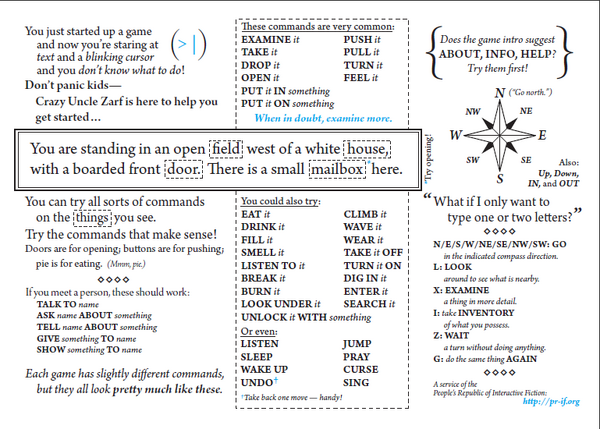 These games are recommended by many as good starting points, to give players an idea of what interactive fiction is all about.

These games are better described as text adventures; they focus more on complex, challenging puzzles than on telling a story.

These interactive fiction games focus primarily on telling a story. Some of them have few puzzles, if any.

IF Archive - hosts nearly every freely-available IF game ever made, along with walkthroughs and hints.
IF Archive Mirror - in case the main IF Archive server is unresponsive.
Baf's Guide to the IF Archive - reviews, links and more for every game in the IF Archive.
Emily Short's IF Reading List - excellent list of further suggestions, sorted by thematic elements. pawcg
ADRIFT Adventures List - List of Text Adventures on the ADRIFT website