This is the best-selling game console ever, so you will find it has an absurdly vast library. It's backwards compatible with the original PlayStation, which was the best-selling game console ever before that, so... say what you will about the PS2, but a lack of games is never a problem. As a downside, it also got a ton of shovelware, so let us help you get the good stuff.

When buying the console, there are certain points to consider. Only the older, "fat" consoles can take the hard disk expansion (Unless you are good at soldering), which is required to play Final Fantasy XI; but the earliest versions are notorious for their fragile lasers. The newer, "slim" consoles come with built-in ethernet, and are usually regarded as more reliable machines.

A point of contention is the controller - unlike the Gamecube and Xbox, it gave the "sweet spot" to the d-pad, not the left analog stick. While most people are okay with that, some find this design aggravating; if you do, don't fret. Some third party controllers, like the Saitek PS2700 (aka Cyborg V.3) or the Radica Phoenix Revolution, let you swap them to their more usual, ergonomically correct positions. There are also adapters to use Xbox controllers on the PS2.

There are a few ways to easily mod your PS2 to have the ability to play games from a burnt disk, USB drive, internal HDD or over a home network (SMB). The easiest method to play pirated games depends on the model of your PS2. For the original "fat" PS2 model, the easiest method is to use software called Free McBoot to softmod, as it only requries the memory card to be inserted upon boot.

Another method dubbed "Independance Exploit" requires the use of a PS1 "trigger disc" in the tray for the exploit to trigger, making it slightly more cumbersome than FMCB. On the other hand, it allows you to directly boot into uLaunchELF, and also doesn't have a stupid name!

For early "slim" PS2 models, Free Mcboot is still your best option. However, Free McBoot will not work on SCPH-9xxxxx models or later. In this case, your best option is to purchase a SwapMagic 3.8 disk, which will allow you to boot burnt games, as well as ISOs from a USB, HDD or network connection. You cannot pirate SwapMagic. Don't even try. It just won't work.

Free McBoot will require special tools to install to a memory card, such as exploited games, a SwapMagic disk, Action Replay MAX, or an already softmodded PS2. SwapMagic is highly recommended for slim models, but not so much for fat models, as you will need to mod your case. Use AR Max for fats, but take care not to purchase a version without USB support.

Games may require a special patch to be applied to the ISO before burning to enable them to boot. Or don't burn discs in 2016, you luddite. Use HDLoader. You can also use an IDE HDD, a USB drive or a home network (If you have an ethernet adapter) to run PS2 ISOs without the need for a disk, using Open PS2 Loader (OPL). Use WinHIIP to install games to USB/HDD.

HDLoader has it's own set of compatibility fixes that OPL will not recognize. For installing games to HDD over FTP, HDLoader is preferred.

Have you played these games? They need a description to be added onto the list:

The PS2 is reasonably emulatable, provided you have a decent PC (recommended 3.0 GHz dual-core). Some games work flawlessly, better than the hardware, others work well, and some don't work at all. It's highly recommended that you don't go farming downloads for ISOs or ripping games to your PC en-masse without checking whether they will work or not.

The best (and most actively developed) emulator is PCSX2. However, you will need to find your own BIOS file for it.

Also, although many of the PS2 classics were, or are going to be remade\re-released in next-gen consoles, emulating with PCSX2 might be a great way to improve the visual experience of some titles. Tried to play something with your ol' PS2 on a HDTV and the graphics looked awful? Hardware Mode allows you to increase the native resolution of the game in order to fix that. Still not happy? Enable the visual hacks and add some MSAA to the mix.

STILL not happy? Paste this on the emulator folder and configure the .EXE in order to add even more AA, Bloom, Sharpen and a bunch of other cool effects to the emulation (Use a guide here, since things might get tricky). However, keep in mind that those "forced improvements" are going to demand even more of your gear, and FPS drops might occur.

ALSO, note that emulating isn't magic, and the "core material" will be in 480p at best, which means that 3D\polygon-heavy games will benefit much more from those changes than 2D\sprite-based games: You better off sticking closer to the native resolution with titles like Disgaea, Soul Nomad, Tales of Series, etc. For every game you decide to emulate, check with the PCSX2 Wiki for compatibility info and contribute your own if possible.

The PS2 homebrew scene is tiny and undedicated. But with modding comes backups and "unofficial demos" so you may be interested. FreeMcBoot is the tool of the day, though installing it can be a hassle. You'll need ESR to boot disc backups, you can run games from an HDD with HDL, and USB Advance to load from a USB. You can also use Open PS2 Loader (OPL) to launch from usb, hdd or network, if you have an ethernet adapter. 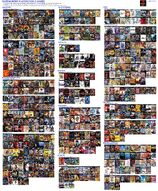 Add a photo to this gallery
Retrieved from "https://vsrecommendedgames.fandom.com/wiki/PlayStation_2?oldid=59984"
Community content is available under CC-BY-SA unless otherwise noted.