Err... I have to ask to some mod to change the title without the capital V.TheDekuLink

There's actually an enormous fanbase about that sequel. I'll add it to the list.-TheDekulink

There was/kind-of-is-still a mod on wc3 quite similar to that battle royale game /v/ dreams about, hell maybe better. you started off in game lobby picking a team of four troll tribesmen, and began ingame among one of the large three of four islands against two other tribes. You didn't have to obey your tribe, but you certainly had better because nomading was suicidal. It put your team at a disadvantage, hurt morale, and made it very hard or impossible to survive against the wild or opponents solo. So, basically every team stayed together and decided on a location somewhere on the tropic islands to settle. you'd have to forge your own weapons, gather materials to construct, hunt together for both food and exp, scout, and if you had the time built a boat to hit higher exp creep. Nourshiment and resources were essential. You had to eat to survive, sleep, and be healthy (high hp) incase of enemy ambush, which was common. Everyone did their part setting up the settlement. The hunter brought meat, the gatherer brought materials, and the rest assisted either of the two acts. If a teammate died, he died, basically no coming back. If your tribe kept busy gathering you could build a handsome (assuming enemy thieves don't show up and steal your unsecured food) settlement quickly, tents, an armoury, traps, towers, a workshop, and what ever else needed. There was generally some agreement on what was to be made, hunter usually wanted a steel axe, mage gets potions. Finally, there was combat, the use of spells, weaponry, inventory, traps, and healing. Going alone in combat against many enemies was always stupid, so some team coordination was needed. The worst would happen often. Your fellow teammates would get singled out by the enemy and looted of everything good (food, axes, spears, beehives oh god) which put your team behind the round quite a lot. Just due to the nature of the game it heavily encouraged teamwork from the very beginning to the end. You should have your teammates' back at all times, and scorn them when they wander too far.

not many people played the game, few have heard of it unless if you were big in to wc3 custom maps (i.e.: not just playing DoTA), few bothered to learn how to play because of the dort fort learning curve. It had quite a cult following, and quite the competitive players at the clan level.

There's a teeny tiny editwar over whether to include "You'll never have what you're hoping for" to the description, with a link to a picture of Crash and Spyro cuddling each other and being romantic. There was suspicion that this was making a crack at "furries."

In my personal opinion, it's no different than a picture of Gordon Freeman and TF2's scout sharing a milkshake and making lovey-eyes at each other for a mythical "HalfFortressLife 2" game. --Mozai 17:03, July 18, 2011 (UTC)

Oh, c'mon. That was more of a friendly scrimmage than a war.

Although, now... You know what you have to draw. Make the magic happen, Mozai.

It's just a joke, and yes, it's furry: that's da joke. But it's not a problem for wiki if there aren't sexual tones in the pic. Do whatever you want, but more importantly draw that pic as soon as possible. -TheDekuLink

Me too, but I tried. -TheDekuLink

Sons, I am appoint. These two, however...

Why are we putting these in a sortable list? Do we really need to sort by the first word in a paragraph? And why put a paragraph of text into a tiny column that is 25% of the 600 pixels of page that Wikia's advertisements allow us? Screw this noise; I'm redoing the layout. --Mozai 23:29, October 24, 2011 (UTC)

This is way more horrible. Pics don't have borders, they all have different sizes and there are no lines that help to distingue the "what it should be" and "similair game". It just looks bad, really, really bad. Please tell me I'm not the only one who think this and that we can come back to the previous layout.TheDekuLink

They didn't have borders before, either. That's a matter of taste, but it's easy to fix, just put '|frame' in the image wiki links.

[the images] all have different sizes

No lines to distinguish "what should be" and "similar games."

Labelling the game description as "what should be" is redundant. The paragraph for "similar games" is marked with boldface text, and always appears as the last paragraph. Adding another separator inside idea descriptions would confuse with the separation between game ideas. --Mozai 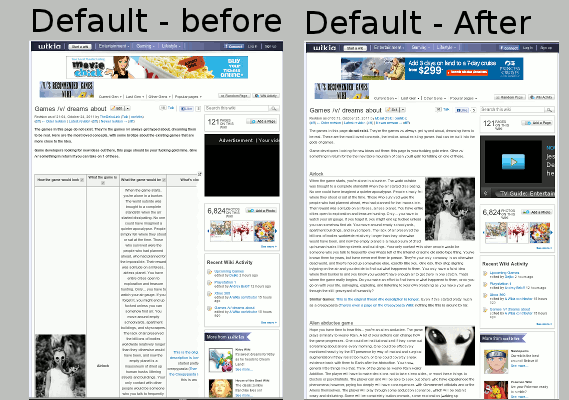 It's just because you are using a wrong resolution. Here is how the page appears to me with monobook. TheDekuLink

"The wrong resolution" no such thing in webpage design. You can't control how wide the user has their viewing window. If Wikia decides to expand the 300px alleyway for advertisements to something even wider, then more people will be using "the wrong resolution" if we insist on using tables for huge blocks of text. (not all of the users of this wiki enjoy the adcleaning tools you and I have). The table layout doesn't withstand window resizing, either by Wikia's interference or by the user setting their window size as they desire. This is because the blocks of text in the table cells are too large; these aren't the one-to-three sentence summaries on the other pages, these are long descriptive paragraphs.

Retrieved from "https://vsrecommendedgames.fandom.com/wiki/Talk:Games_/v/_dreams_about?oldid=47468"
Community content is available under CC-BY-SA unless otherwise noted.