This list will be adjusted as Wikia staff continues to illuminate what exactly is meant by "pornographic, obscene or offensive." If you really need to use terms (ie. as part of a product name) that would be offensive to Americans, use the {{Spoiler|spoiler template}} to write it as black-on-black text.

Delete please this belongs on some other wiki

2.What is a "real quality video game"? Are you saying these aren't "real" video games? All of these games have plenty of gameplay and content with one very notable exception. And what does "quality" mean? Production values? That's not a valid point. Game A is not more of a game than Game B just because they spent 20 million more dollars on it. Does it mean how good or bad it is? Then that's entirely subjective, and also not a valid point.

Does this have any actual gameplay, or is it just a VN? From what I can tell it seems to just be an eroge novel.

Mhhh... need someone who played it to be completely sure.

And on that matter, it seems Kasumi Yuna 3D is also just an eroge novel.

There's no text, you just have to move to the next or previous animation. I'm pretty sure it's not qualificable as a novel.

I don't think I'd qualify that as a game, either.
You have a choose between two buttons, this is a challenge. The right one makes you move forward, the wrong one bring you back. At the beginning you can press only the forward button: this is a tutorial for the game to show you how to play it. It's okay, it's a game.
Not a game appropriate for this list. It needs to have something more than just clicking to view the next scene, otherwise it basically amounts to a visual novel.

It'd probably be best to split these between Games with solid gameplay like Rance and Raidy and "Mini-games" with simple controls meant for fapping like SDT and such. --Dejiko 16:27, May 31, 2011 (UTC)

I propose breaking out the flash games into a separate list on the same page (like what was done with Zone's stuff), since they're platform independent (unless you have an iPhone *LAWL*). 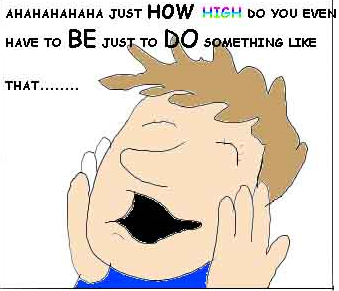 Shame on you all

So, why not have a separate page for visual novels? Edit

I mean, there are plenty scattered about console suggestions like 999, Saya No Uta's on the horror page and Sengoku Rance is mentioned on the PC page; why not just make a general visual novel page?

Please seperate the kiddy shit from everything else Edit

Define Kiddy shit. That has several meanings on this page.

Why isn't Shrink High on the list? It's an amazing h-game if you are into GTS.

Why there are people complaing about something missing on a wiki page? Thanks anyway, I'll add it immediatly. TheDekuLink

I believe now that /vg/ is accepting visual novels we should make a section for translated ones. It is also being more commonly accepted around /v/ too. People like(?) Katawa Shoujo and Monster Quest.

Okay, so I did a second pass, and I was more lenient on games that had loli/shota in the description, but seemed more like 'young-looking' than 'underage'. I'm thinking of putting together some kind of actual guidelines for us on the adult games pages so we can all know how we should police ourselves, but in general, here's the gist of things:

-No explicit descriptions of sex. Try to say what the game is about without it. (You can still talk about sex, but don't talk about exactly what happens, where the dick goes, how long they were at it, and the effect on the girl's anatomy. Think more like synopsis.)

-No explicit pictures. I'm including silhouettes (mainly of penises) in this. Just edit the explicit parts out or use a different picture. (This doesn't mean 'sexy' pictures are out, it only means pictures showing genitalia or bare breasts.)

-No underage characters (that is, under 18) in a sexual context. This means no loli/shota. Do not even use these terms to describe a youthful-looking female/male who is 18 or older. The English language is replete with other words you can use. The reason for this is not about what the terms mean, but about what other people will see in those terms. Since loli/shota can be quite easily interpreted as the more literal 'underage' as opposed to the more figurative 'youthful', it's far better to err on the side of caution and use different terminology that's less dangerous.

The games are about 7 girls that are very nasty and do a lot of things to naru, in Impact you actually choose 2 of the 8 girls and watch the scene, it doesn t have a gameplay but i recomend it.

Seems this game has fallen out-of-favour with /v/. Possibly because the game is supersaturated with furry and /d/, and could be because the author can't handle the heat/hate that is /v/. --Mozai (talk) 04:21, October 15, 2013 (UTC)

Page has been locked because bots keep adding nonsense categories to the page; not sure why, possibly as a 'test' to make sure the bot software works, or to make the bot's IP address seem more legitimate? --Mozai (talk)

I see that the page is locked to prevent editing and just wanted to have somebody go down and fix a typo and add a link in the flash games section that I spotted while browsing through the page. There's a game that has the title typed in wrong, it's hanakanmuri not hanankamuri swfchan link here http://swfchan.com/2/8679/?hanakanmuri.swf

The flash at that link is broken; jumps the browser to a 404 when clicking on 'start'.

Page got unlocked and the bots returned immediately with "adding categories." Locking it again, this time just for unregistered users. Wish I knew why bots are doing this, so as to figure out a better solution. --Mozai (talk) 13:07, July 15, 2015 (UTC)

This Toffi guy, he made those fighting game for free and they've got lovely anime art and very good H interact. I think those game worth mention. Below is the link

That 'Full Flap' you mentioned isn't an author nor a production company, it's a retail outlet. --Mozai (talk)

Retrieved from "https://vsrecommendedgames.fandom.com/wiki/Talk:Hentai_Games_(R%3D18)?oldid=56463"
Community content is available under CC-BY-SA unless otherwise noted.