Trails in the Sky

This page's content is really, really outdated. Check out the stuff there and update if possible. 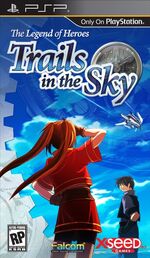 Thanks to the Japanese Role Playing Games generals on /vg/, the lack of games on Vita and people not knowing about the PSP library, this gem has been brought up to light. The series is pretty well known in Japan but only the first game has seen an English release back in 2011. There is quite a lot of explaining to do about this game and the series in general, which are constantly repeated in threads so we hope this page can answer questions and doubts about it before you pick it up.

The game is the sixth entry in the "Legend of Heroes" series by Falcom, which is like the complete opposite to their other famous series "Ys" focusing on story, strategy, customization, sidequests and all you love in RPG games. The Legend of Heroes series had three completely unrelated games (III, IV & V) localized (quite poorly) by Namco known as the "Gagharv Trilogy".

Originally planned as one long ass game, however restrictions in development caused it to be divided in three different games. The games were so popular in Japan that Falcom continued the series (now titled "Kiseki" series among fans) in 2010 with the release of Zero no Kiseki. Currently the series spans the following games:

The series is pretty infamous because it took so long to get an English release. All of this was caused thanks to massive amount of text each game has and that made localization companies want to stay away. XSEED has been brave enough (and we thank them for their efforts) to pick up the series, starting with the release of the first game.

Among Japanese fans, the series is quite popular (as popular as SMT and Tales Of, unbelievable as that is) and has been constantly praised by its good characters, awesome soundtrack and mindblowing plot-twists.

The story starts as eleven year-old Estelle Bright is waiting for her dad Cassius to return home so they can have dinner. Cassius shows up with a beaten up kid named Joshua and takes him in his house and adopts him. Six years later, Estelle and Joshua begin their jobs as Bracers, people who help others out in many kinds of situations ranging from monster killing to delivering packages, following the footsteps of Cassius who is a very famous and high ranked Bracer reaching a legendary status in the kingdom.

The story then evolves in Estelle and Joshua going around each region in the kingdom and doing Bracer quests to become as great as Cassius. Of course, things will get more complicated in their way and they'll be involved in a bigger scheme.

While it starts out pretty generic and bland, it evolves into something great. There's a lot of subtle foreshadowing and character and world development creating one of the most fleshed videogame universes ever. There are only two problems with this game: the first is that it moves slowly: the prologue and first chapter are six hours long each and pretty uneventful. The second is the ending, it's a cliffhanger that the second game picks up. To make matters worse, all the important twists and events happen in the second game.

This is another great thing. The gameplay focuses a lot on sidequests, you get them by checking the billboard at the Bracer Guild or talking to people. By doing them you'll be rewarded with money and Bracer Points at the guild and people will sometimes give you items personally. Be sure to make a lot of sidequests, having a high amount of Bracer Points will reward you with bonuses in the second game like unique items.

There's also the Orbment system where you insert gems called Quartz that gives you unique buffs and allow you to use Arts.

The battle system is similar to an SRPG. Your party members can move a certain amount of squares and you can either Attack, use magical Arts (costs AP), skills called Crafts (costs CP) or use items. The main focus of the system is turn management. Battles are difficult (including normal ones) and require lots of strategy, losing a turn can be a fatal mistake. Each time to select an action you can see when your next turn is going to be, in the case of using Arts it will show you when the Art is going to be casted. The game encourages you to exploit enemy's weaknesses and prevent them from attacking, battles can be very long or short enough if you play your cards right. There are also bonuses in battle like HP Heal, Critical Hits, STR Up, etc.. These are shown next to the turn order and with the proper strategies you can position your next turn with a bonus and take advantage of it. Last but not least are Craft Breaks. These are basically Limit Break attacks and can be used once your CP (which is replenished by attacking or getting attacked) reaches 100. Craft Breaks can be used at any time completely disregarding the turn order, this adds a new layer of strategy in which you can steal a bonus or kill the enemy before it kills you. If you use a Craft Break when your CP is 200 (the maximum) it will be stronger or have additional effects.

Finally, the game is about 50~60 hours long. A New Game+ option is unlocked once you clear it along with a higher difficulty option. This will allow you to do the sidequests or get the items you missed.

Will we get Second Chapter?[]

This is a touchy issue. Second Chapter was two UMDs long and required to switch disks quite often making it almost impossible to do a digital release. The PSP market is almost dead outside Japan so a physical release has been ruled out.

Falcom also uses a new compression method, which allowed them to make Ao no Kiseki (which is almost as big if not bigger) fit in a single UMD. However, rereleasing SC in a single disk is a financial risk for such an old game that all of Japan has already played, not to mention how niche it is in the West which isn't reassuring on sales.

Despite the big effort that is required to translate a game with such a huge amount of text like this one, XSEED has stated repeatedly that they are translating the game, slowly but surely and will focus on how to release it once they're done translating. They've been shuffling around some solutions but haven't decided on anything yet.

For now, the only thing we can do is wish for the best and wait patiently. The game is slated for release in 2017 with any luck.

Definitely. Patience is a virtue and rewarding, especially with this game. If you stick with it you'll find one of the best RPG games available.