All of these features are mixed and matched in various games for all sorts of effects from having a handy inventory screen built into your controller to being able to control the camera as you shoot by moving your body. Some may decry it as "gimmicks", but it's hard to deny that the Wii U certainly is a unique system with many, many unique options available to it. 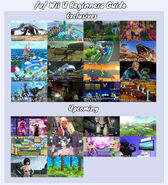 Add a photo to this gallery
Retrieved from "https://vsrecommendedgames.fandom.com/wiki/Wii_U?oldid=59367"
Community content is available under CC-BY-SA unless otherwise noted.