America's favorite game console ever! "Should I get one?" Hell, why not? The Xbox 360 has an immense library, and except for a handful of titles, it has an edge over the PS3 when it comes to multi-platform performance. Exclusive-wise, compare this with this (rule of thumb: Western devs were all for 360, Japanese devs were all for PS3). The console and most of the games are very cheap at this point. And its controller is widely regarded as incredibly ergonomic and comfortable. So, yes, you'd do well to get a 360.

Piece of advice, though: early units were infamous for the "red ring of death", avoid those like the plague. The later models "S" and "E" are rock-solid, get them.

This means a game is Xbox One compatible. 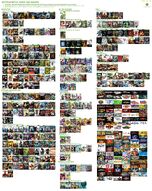 Add a photo to this gallery
Retrieved from "https://vsrecommendedgames.fandom.com/wiki/Xbox_360?oldid=67196"
Community content is available under CC-BY-SA unless otherwise noted.